I know what most of you are thinking, what’s there to write about Goa? Who doesn’t know Goa? Well, meh! this is Goa from my eyes in my words.  This was my fourth visit to Goa, yet it was nothing like before. I have mentioned in one of my posts how I always wanted to explore Goa and know the real Goa, the locals, the markets and the food. And this time I did explore all of that and many more with an amazing travel buddy. I can’t thank Sushma enough for putting up with me and making this trip one of the best trips so far. When you’re with an awesome company the ride to any road ought to be awesome.

My last three trips to Goa were during off season. My first trip was during first week of September, second one was last week of May, third one was again first week of September. But this time I went during mid October, they call it “Goa season”. People usually avoid the season for the expenses and the crowd hence the same reason for us. By us I mean the group of people  I have been with. However I always wanted to know why Goa is hyped about the season, so I went during this time of the year with an amazing company. I would always recommend Goa during the season which is Oct-Mar, there is a reason why they call it “Season”. Goa has humid climate but during this time of the year it’s not that hot.

I stayed in Goa for 4 days and I covered places that I had never been to. In this post I will cover day 1 and 2 of my stay in Goa.

Places I visited in Goa:

We got off from the bus at Panjim, had a good omelette pav for breakfast and then took a local bus to Candolim where our hostel was. We stayed at the Backpacker Panda hostel. The check in to the hostel  was at 2:00 PM so we freshened up and headed for an early lunch. We got an early check in at 1:00 PM, we freshened up and headed to the Candolim beach which was right behind the hostel. It was around 4:00 PM and the sun was kind on us. We thought of taking a walk from Candolim to Calangute. The walk by the beach was amazing. As this is the season there were a lot of foreigners in the Candolim beach sun bathing and the beach was very peaceful.

By the time we reached Calangute the sun was setting and it had left the sky purple and pink. In Calangute you will find Indian tourists  with families and is quite crowded. It gives a good vacation vibe.

After the sunset we headed to the Tibetian market on the other side of the Calangute beach by foot. It’s a medium set up with quite a good number of stalls reflecting the Tibetian culture. I got a singing bowl from a Ladakhi guy. 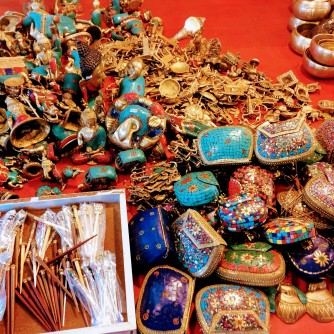 After shopping we headed to the Baga beach by walk. In the evening the beaches come to life with the shacks all lit up. But we decided to sit by the beach and slept under the stars at the beach. I always wanted to sleep under the stars and I tell you it was a really good experience. Later we went to Tito’s as it was my friend’s birthday and we wanted to have a good dance. Later we decided to take a cab to the hostel as we had walked for more than 10 kms that day already and were quite tired.

So day 2 was planned for the Dudhsagar Falls. For me travelling is about connecting with the locals and the best way to do that is travelling by the local buses. So we took a bus to Panjim from Candolim and then to Molem. From Molem we took another bus to Kolem. Kolem is where the ticket booking for the Dudhsagar Falls happens. As we reached what we saw was not expected. There was a huge queue and the Falls authorities have total 300 Jeeps and by then 250 were already gone. Only 50 were left and seeing the people in queue we realised 50 will fall short for all of us. In each Jeep 6-7 people can accompany and we were at least 500 people in the queue. We reached by 11:00 AM and stood in the queue for an hour but the queue didn’t even move an inch. When we went ahead to speak with the management the preference were given to the online advance booking. So then we decided we would come back the next day with the online ticket. It was way too crowded, hot and very frustrating.

We went to the St Francis Xavier’s church first which is on the bank of river Mandovi. The church has an amazing Portuguese architecture. Within 200 meters vicinity of the  church there’s an Archaeological museum of Goa and The Viceroy’s Arch. 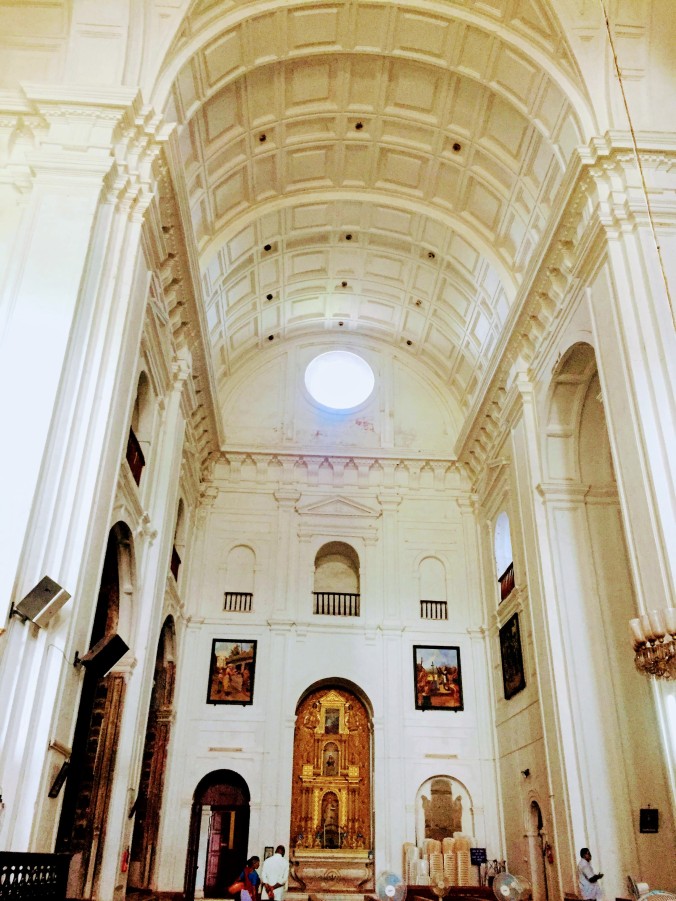 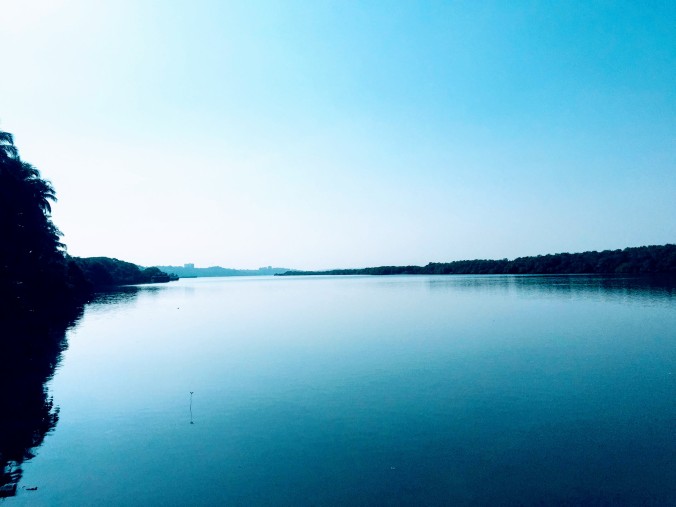 The Viceroy’s Arch built in 1599 AD to mark the Portuguese conquest of the city.

Basilica of Bom Jesus has equally beautiful architecture. As the churches are quite old, parts of the churches were under renovation. 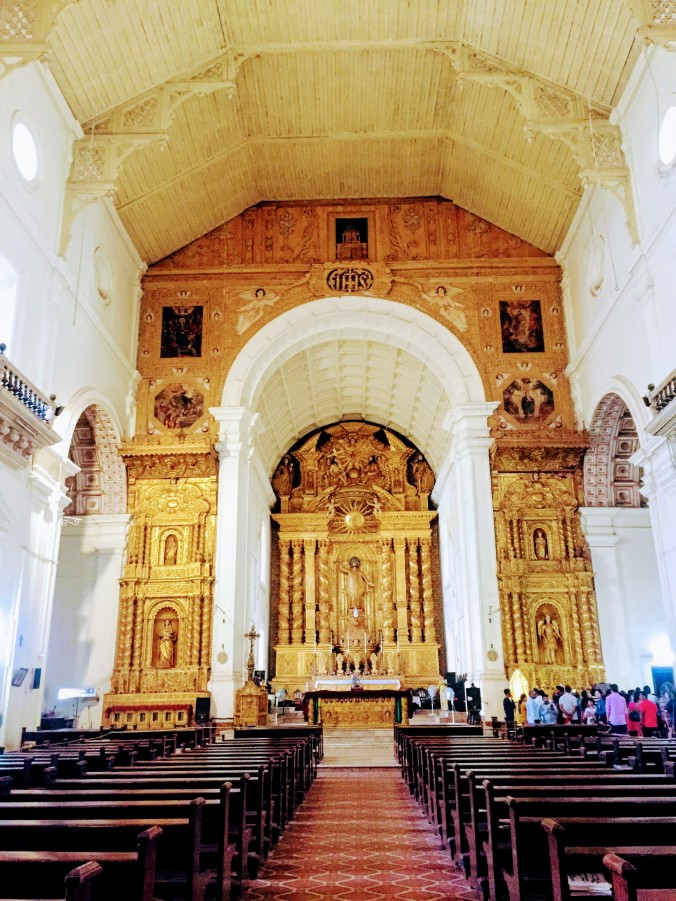 Inside Architecture of Basilica Of Bom Jesus Church

From Velha we took a bus to Panjim and the architecture of the buildings are amazing. If you have time, stop by the houses and buildings for good clicks. Roads were very clean and you can see the antique architectures.

From Panjim we headed to Dona Paula in South Goa. It’s not like the usual beaches. You get to submerge with the beauty of the sea from a bridge. The way to a hill was closed as it was high tide. Being a part of south Goa you see a lot of locals in this beach. 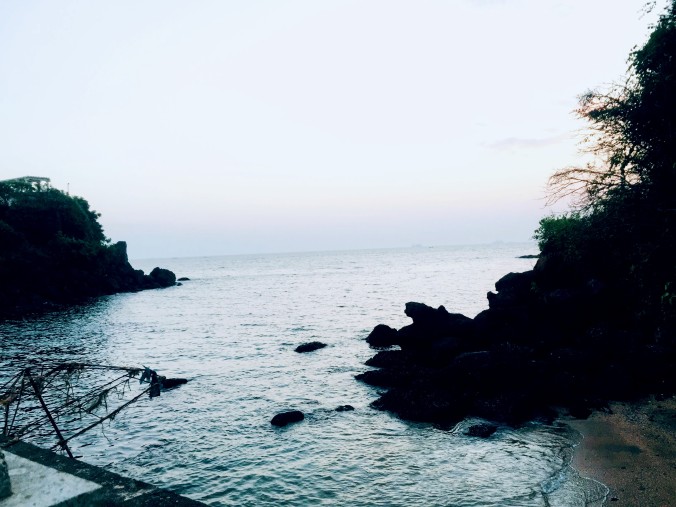 We reached Miramar Beach when the sun was at the horizon. The beach again has the local vibe to it.

We headed to our hostel and then went for dinner at the Candolim Beach.
We ended our day sleeping under the stars again. The moon was red and close to the earth, sky full of stars and the waves dancing to the charms of the moon was one of the best experiences I had in Goa.

The glance of universe

1. St Francis Xavier’s church have strict dress code. No above knee and sleeveless clothings are allowed. So you can carry two stoles. One to tie around your waist and another to cover your arms. Same for guys no shorts above knees.

4. The weather is humid so keep yourself hydrated.

6. The hostel was clean and had good vibes to it. There were no toiletries, so carry your essentials. The common area was everybody’s favourite to chill and meet new people.

I will make a food budget in my other blog on Goan Food.